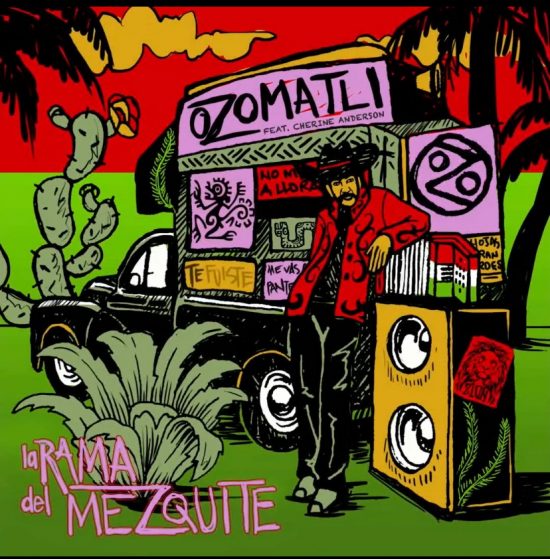 LOS ANGELES, CA – Known for their creativity and unique musical sound, Grammy award winning musicians Ozomatli don’t do many covers. So, when they do, you know it is something special. Their newest single, La Rama Del Mezquite, is one such rare gem. Produced by Ozomatli and Sly & Robbie, the track seamlessly fuses cultures and musical styles into an unforgettably catchy rendition of the popular song. Fans got their first taste of the surprise release last night at midnight.

Originally written by the legendary Ramon Ayala, whose countless hits have left his indelible mark on the Mexican Regional music scene and beyond, the Ozomatli tribute features the dulcet tones of talented Jamaican actress and dancehall/reggae vocalist Cherine Anderson, who adapts Jamaican Patois and English into the track, bringing together worlds in musical harmony.

“Cherine is one of the most talented and incredible singers I’ve ever heard,” says Ozomatli’s Justin. “I just remember getting the first take back and thinking, damn, this is a wrap and done, because it sounded so good. Then she told me that was the demo and that it would be better than that!”

Prolific Jamaican rhythm section and production duo Sly and Robbie then blessed the track, using their vast wealth of experience and tradition to blend two worlds, providing a perfect example of how the distance between people doesn’t always define us.

“The legendary norteno king Ramon Ayala takes an Ozomatli charter plane to the Caribbean and meets a beautiful and talented singer, they have a baby and the moving starts,” offers Raul. “Keep dancing good people!

A true messenger of the multicultural artists, Ozomatli believes their version serves to remind us that if we take time and listen to each other and share in our differences, the world will be a much better place.

“Making this song was incredibly gratifying,” Justin continues. “The process of seeing it all come together was an exercise in how people from different worlds and backgrounds can share and celebrate our differences through music!

To see the video for Ozomatli’s La Rama Del Mezquite, which releases on March 10, visit https://www.youtube.com/watch?v=jpAYZKX2Cz4.